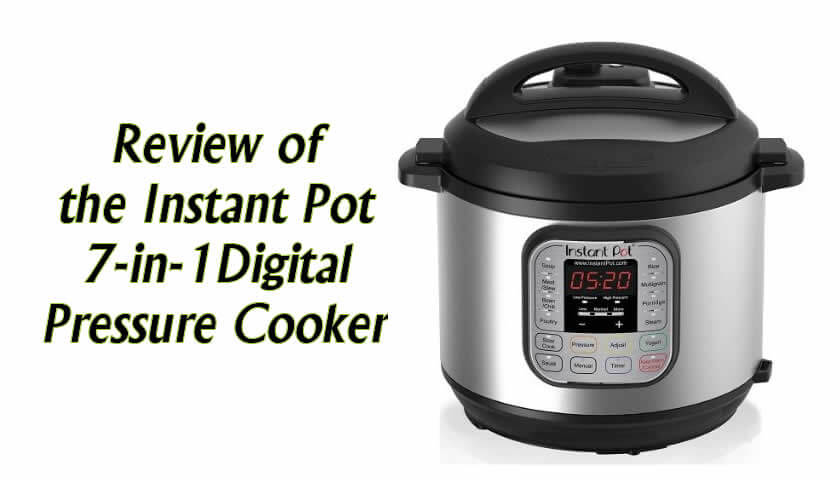 In fact, we were fairly happy with the Cuisinart cooker.  It did a great job and it has lasted for several years.  We still have it and use it when we need to cook two things at the same time.  Having said that, we are absolutely thrilled with our 8-in-1 pressure cooker from Instant Pot.

We use it constantly.  Especially on the weekends you may find us using it for one thing after the next.  We love the fact that it can be used for so many different purposes.  We use it to make cheese and yogurt.  We cook rice and lentils, soups and sauces.  The fact that it can double as a slow cooker has been amazing–we use that for any number of the usual slow cooker meals.

If you’ve never had a pressure cooker before, you may not even realize how great they are. I’d say this appliance is a must for a family that cooks fresh foods at home. They can cook foods that would typically take a long time with traditional cooking in fractions of the time.  For example, they make cooking rice a much shorter task–it only takes a few minutes to cook basmati or whole grain rice.

We are a big fan of Indian foods, so we use it to cook staples such as dahl or lentils.  Recently I made a meal by putting in frozen vegetables, raw pasta and frozen chicken along with some pasta sauce.  The whole thing was cooked and ready to go in 30 minutes.

The Instant Pot 7 in 1 does much more than 7 things.
– Slow Cooker– Really useful…if you’ve owned a slow cooker before, there isn’t much difference between this and other good quality slow cookers–it is just very convenient to have this option built in.  This one will slow cook for up to 20 hours.

– Pressure Cooker– You can cook with either high or low pressure.  High pressure cooking cooks foods up to 70% faster than regular cooking.  Low pressure also speeds up cooking but is used for more delicate foods that might not do well under high pressure.

– Yogurt Maker– We use our Instant Pot weekly to make home made yogurt.  Typically we purchase organic milk at Costco and then add whatever’s left of this week’s yogurt to the milk to make next week’s.  The microprocessor takes care of keeping everything at the right temperature for excellent yogurt. We also use this cycle to make farmer’s cheese.

– Rice cooker – The rice cooker is great. Much faster and very effective at making perfect rice each and every time.  If you eat lots of rice, than you’ll be spending lots of time using this mode.

– Browner/Sauteer-This is useful when you need to brown or saute before you pressure cook.  For example some people like to brown their rice before cooking it, or for example for Italian cooking you may want to saute some garlic in oil before you add other ingredients for pressur cooking.

– Warmer – This is more useful than it sounds, but mainly we use it to keep our creations warm until we’re ready to eat them.

If you are concerned that pressure cookers are dangerous, not to worry.  Modern digital pressure cookers are very safe and easy to use.  This model has several levels of safeguards against the kinds of explosions or burns that you may have heard about from pressure cookers of days gone by.  It is also Underwriters Labs listed and fairly energy efficient even though it is a 1,000 watt device.

One safety aspect that isn’t often considered is the composition of the cooking pot.  The Instant Pot uses stainless steel rather than teflon, which I think is a huge plus.  Our Cuisinart pressure cooker has a teflon pot and that concerns me–especially at high temperatures reached by such a cooker you have to be somewhat concerned about off gassing (this is particularly of concern if you have pet birds in your house as teflon gas is deadly to parrots, etc)

Your Instant Pot might come with a rice paddle, measuring cup and soup spoon.  All three of these are pretty much perfect for the recycling bin.  I am not sure why they bother to include them.  There is also a steamer rack.  This one could also be improved, but at least it does prove to be useful at times.

By the way, if you have it in the budget, Instant Pot’s latest “Instant Pot Smart” models include WiFi technology.  The upshot is that it allows you to use your iPhone or iPad to setup cooking and to monitor it.  I definitely like the idea of this but I didn’t think it was worth an extra $100.

Looking for other great kitchen appliances? Check out my Juicepresso review and my review of the Vitamix blender.