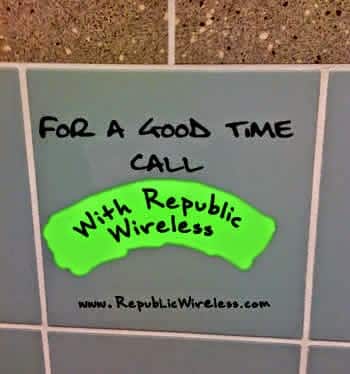 If you have AT&T or Verizon contracts for your smartphone, you’re paying too much money.  Not only are you paying too much, but you probably don’t have an unlimited data plan and it is likely that you have some stupid text messaging cost arrangement too.  If you have T-Mobile or Sprint, then you’re probably getting a better deal, but there are still savings to be had–and sometimes those savings are so great that it might be worth to break your contract and pay the penalty to switch to a different carrier.

If you have an AT&T or T-Mobile phone that want to keep using, you’re in the best situation because those phones have a certain amount of flexibility that Verizon and Sprint phones do not have.

Let’s talk about Republic Wireless.  They offer no-contract service on the Sprint network which is unlimited talk, texting and data for either $19/month or $29/month.  The catch is that you have only one choice of phone (a relatively decent Motorola Android phone) and you have to buy it from them.  The cost for the phone depends whether you’d like to pay $19/month or $29/month.  If you’re willing to pay $29/month then you can get your phone for $99.

If you want to pay $19/month then you must pay the full cost of the phone up front, which is $250.  There is no discount for multiple lines however, which means there isn’t anything like a family plan, so depending on your situation the savings from a typical AT&T contract could be relatively small–that is assuming you don’t really need unlimited data.  If you only need one or two lines, then you should definitely consider it.  You can read my review of republic wireless and Google Project Fi.

Another Option: Get the Same Network Much Cheaper

There are several companies that purchase bulk access on AT&T, Sprint, T-Mobile and Verizon networks and then resell it for cheaper with no contracts.  Some of these are especially good options if you already have a phone you want to keep using but that is no longer on a contract with another provider.

This applies to one of my phones…I originally purchased a Samsung Infuse Android phone from AT&T.  Now I use the phone with a month-to-month deal from Straight Talk Wireless.  I pay $45/month with taxes for unlimited data, texting and phone service.

The great thing is that I am using my old Android smartphone on T-Mobile’s network, but paying much less than I would if I had a contract with T-Mobile   It works very well and the setup involved putting a different SIM card in my phone to get it going and changing a few settings.  Relatively painless.   They also offer some phones that you can purchase from them outright, but you’re even better off if you already had a phone that you can use on their network.

Another reliable example that is similar to Straight Talk Wireless is Simple Mobile.  They are definitely worth comparing to the Straight Talk if you’re thinking of going that direction.  They use the same networks as Straight talk. You might also look into Net10.

If you have a Verizon Phone You’d Like To Use

I only know of one company that offers service on Verizon’s network and they do not have an unlimited plan, but it should still be cheaper than Verizon themselves: Page Plus Cellular.  I am not sure if you can bring your own phone though.

If you have a Sprint Phone You’d Like To Use

I need to look to this.